I’m really looking forward to playing a set at the Vortex Jazz Club in Dalston this Tuesday 1st August, opening for incredible pianist and fellow Norfolk boy Kit Downes. Can’t wait to hear Kit’s set – he’ll be joined by Sam Lasserson on bass and Colin Stranahan, who’s over from New York, on drums. I’m playing with Conor Chaplin and James Maddren and we’ll be playing our take on this beautiful Richard Rodgers song and this v v hip Dexter Gordon number, amongst other things. More info about the gig here. 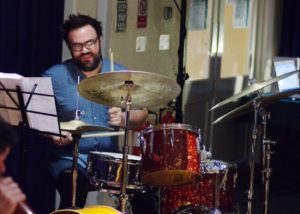 Very happy to say that my debut album, Golden Earrings, is being released on Fresh Sound New Talent Records on September 1st 2017. It’s a duo with the amazing New York pianist, Michael Kanan, and features compositions by the likes of Nat ‘King’ Cole, Duke Ellington, Jerome Kern, Victor Young, Irving Berlin, plus one original of mine. Michael will also be coming over to the UK for an album release tour in September, with an album launch gig at the Vortex Jazz Club on 13th September. More info to follow on all the gigs and how to buy/preorder the album etc, but here’s a short promo video for the album: